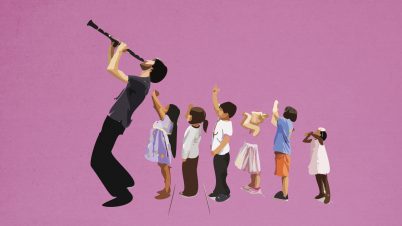 Awaken the musical talent in your child. Grammy award-winning Israeli-American jazzman Oran Etkin is set to return to the Czech Republic for the sixth time, with his interactive concert for children aged 3 to 10. The show has become a traditional cornerstone of “Mladí ladí dětem” – an educational programme organised by the Mladí Ladí Jazz international festival.

The interactive concert is based on the unique Timbalooloo method, helping children to perceive music through their own imagination. The method uses fun games, stories and songs to awaken the musician inside of everyone. The children actively participate in the concert and are not required to have any musical knowledge or play any instrument.

“Children are capable of using the language of music fluently, without having to know the rules of grammar,” Oran Etkin adds. The uniqueness of Timbalooloo also lies in the choice of music: rather than playing children classics, the band plays jazz songs by Herbie Hancock, as well as African, Brazilian or Indonesian music. Children need to be shown new things.

How does Oran Etkin know what works with children?

Before breaking through to his rich musical career, Oran Etkin worked as a teacher – hoping to pass on his musical knowledge to the next generations.

“My sister is ten years younger than me, which gave me the opportunity to observe the thinking and behaviour of children since I was a child. Later on I started teaching them rhythm, imagination and a sense of melody. These need to be introduced at an early age, before they even learn to speak,” said Oran Etkin in his interview with the Czech Radio. He quickly understood that his presentation must be based on stories. After years of experience he knew exactly how to do it.

In 2019, Oran Etkin released his new album “Finding Friends Far from Home”, which was created all around the world. The record includes the Czech musicians who formed Oran’s band at the Mladí ladí jazz performance in Prague. Following that path, the album was always recorded with local musicians – like in China, Zimbabwe or Japan. The album is available online or available to purchase at any of the events.

The interactive concert is designed for children aged 3 to 10, and is led in English language with Czech translation. The concerts will take place in Brno, Nymburk, Děčín, Prague, Ostrava and Olomouc.

Subscribe to our newsletter and stay updated about fresh jazz vibes around you.