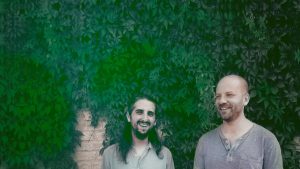 Once again, Prague’s musical spring will feature the fresh & energetic lineup of the Mladí ladí jazz festival. The series is set to kick off on April 5th at Palác Akropolis with a live performance of one of today’s most interesting electronic wizards James Holden, together with the free-jazz talent Wacław Zimpel. Just two days later, they will be followed by an exciting mix of experimental hip-hop, jazz, funk and progressive soul by The Lesson GK – an elite group of musicians originating from the underground NYC hip-hop scene.

James Holden is a musical visionary, mathematics graduate at the Oxford university and founder of the Border Community label (eg. Leafcutter John, Luke Abott, Nathan Fake). He enjoys working with manually made synths and his work is nowhere near conventional.

Wacław Zimpel is a Polish clarinet player, well-known in the Czech Republic for his free-jazz improvisations. It is one of the greatest Polish talents of the century and a recipient of prestigious Polish awards such Paszport Polityki or City of Poznań Artist Prize.

They met in the summer of 2018 in a London studio, where their trans-like creative musical harmony resulted in a series of lyrical dialogues between the alt clarinet and modular synthesisers, ultimately producing a deeply unique sense of moment.

According to fans, The Lesson GK concerts are life-changing. They are church services with rap. Unforgettable nights full of magic, making you feel like home on marvellous planet where every day is a weekend – just as one of their song goes.

In 2012, the all-star musician group started a common weekly jam-session, which soon became iconic for the many New York experimental hip-hop, rap, funk, R&B, progressive soul & jazz fans. Even though the 7th of April is a Tuesday, this bunch will most definitely make it feel like a full-on weekend. After all, they have previously worked with Snarky Puppy, Cory Henry & the Funk Apostles, Thundercat, or even Lauryn Hill and Nelly Furtado.

The Mladí ladí jazz festival would not be complete without the traditional Open Air concert on April 30th, the International Jazz Day. Tickets to the announced shows are available through the GoOut network with a special discount for all fans under 27.