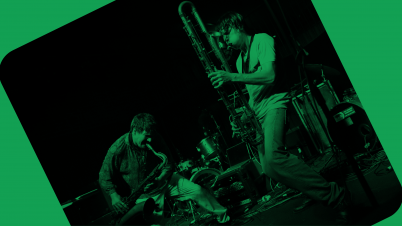 Iggy Pop once said: “I’m telling you these guys are cool!”. The Guardian describes their style as virtuoso jazz or acoustic techno. Which one is it for you?
Whichever it is, Moon Hooch are set to return to Prague with their brand new album “Life On Other Planets”.

In 2019, they made the crowd dance at our open air event at Karlovo náměstí. In 2020, they will perform on April 25th at Palác Akropolis, presenting their new album “Life On Other Planets”, out on January 10th.

Moon Hooch were buskers only until the NYPD banned their performances for disturbing public order in New York. It didn’t take long for them to start selling out concerts around the world, and performing in TV shows along stars such as Tame Impala and James Blake.

They say they want their concerts to be like crazy dance parties. Even the most progressive jazz musicians sometime frown upon them. One of the reasons possibly being the large traffic cone on one of the players saxophone.

Make sure to check out their Tiny Desk Concert by NPR, which already gained more than 3 million views on YouTube. The Tiny Desk creator once said it may be his most favourite show ever. It’s not every day that you hear such a mix of jazz, EDM and rock.

Life On Other Planets

The band like to describe themselves as a post-rational group, since they always act based on how they feel, rather then thinking about their own future or success.

That very essence was projected to their new record Life On Other Planets, where they simply tried to transform their live performance energy into a 9-track album. Each song was recorded in one take.

And how does it sound? Somewhat like taking their sweaty t-shirts after a gig, squeezing every last drop from them, distilling the liquid, filtering it through carbon filters and then pouring it into your ears. No studio magic, just 3 virtuosos, who seem to share telepathic skills way beyond the genre and tradition.

Fans will listen to this record and definitely be able to say: “This what they sound like live!”

A revelation of the Czech music scene. Tygroo take an inventive approach to combining genres such as klezmer and balkan with hip-hop, jazz and even dubstep an dance electronica. Their entire show is played on acoustic instruments only – mainly brass and drums – giving them unique musical taste & energy.

Their shows are like rituals – leaping from saxophone drum’n’bass to middle-eastern electrohiphop, through balkan techno, eerie 80s love song parodies and back to sax psy-trance and Moon-Hooch’esque jazz-disco hits. They are therefore the perfect partner-in-crime. They leave their gigs sweaty, exhausted, but happy. Just like the audience does.